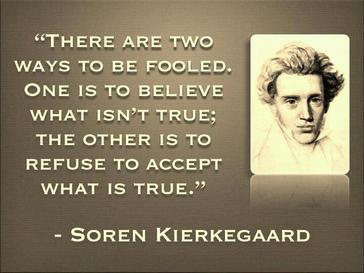 Lastly on Kierkegaard, truth was a valuable and substantial part to his philosophy. Truth, too many others, means that which is true or in accordance with fact or reality. However Kierkegaard argued this concept, stating and answering the ultimate question: “Is truth Subjective? And according to Kierkegaard, yes it is (Kierkegaard, 1849) . ‘Truth is subjective not objective. An objective uncertainty held fast in an appropriation. Process of the most passionate inwardness is the truth, the highest truth attainable for the individual” (Kierkegaard, 1849). According to Kierkegaard, it is not so much as what is believed as it is how it is believed. Truth is an idea illogical for set reason, requiring both a risk and a ‘leap of faith.’ Truth comes about through the teleological suspension of the ethical. For example, ethical codes do not embody the truth of religious faith. Ethical obligations are sometimes superseded by truths of subjective existence. The difference between objective or Socratic truth and subjective truth is the appropriation process of making the absurdity one's own. Thinking about it doesn't get in the way of assumption. Truth is not something that should be proved or rationalized, it is a human’s own personal ideology (Mussmachi, 1997). “Truth for me”, not because every other individual believes it or justifies it (Kierkegaard, 1849). Therefore Kierkegaard does answer the ultimate question, is truth subjective? As  he contradicts the ‘original concept that truth is rationalised, and explores further that truth is personal, individual and based on a person’s faith. He also answers the questions, with three main characteristics of subjective truth, including that it is paradoxical, concrete, and not universal. Mahayana Buddhism and the fivefold paths Bodhisattvas accomplish to reach enlightenment, is another disciple who also disagrees with the traditional concept or definition of truth.